Interview with I.M. Free, author of I Don't Have Time 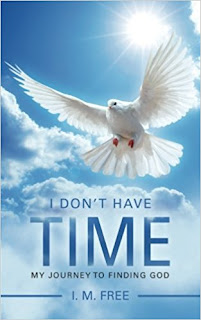 When she was in her early thirties, the author realized something was guiding her. Suddenly, a whole new world opened up.

She had never considered herself an atheist, but she had always questioned the stories in the Bible as she thought it was impossible for anyone or anything to have so much power.

But through her own experiences, she learned something really does have that much power. She became one of the few people throughout time who began communicating directly with God.
Sometimes when the author awakens, she knows something she didn’t know before she fell asleep. She feels things she wasn’t aware of before. This is how God protects her and prepares her for life.

I Don’t Have Time is the story of how God found the author and how she realized that while some people live as though they won’t face consequences for their actions, they could not be more wrong. Even if they don’t pay the price in this lifetime, they will in the next.

How did you come up with the title of your book?
For many years my life consisted of trying to raise my girls, keep up my home, cook meals, pay bills, attend my daughter’s ball games, and care for several ill family members.  Often I felt I didn’t have time to think about anything beyond my present life. In retrospect, I wish I had chosen a different title.
What is your writing environment like?
When I wrote my manuscript, I was on my enclosed back porch, which is very quiet, peaceful, and private.
What are some of the best tools available today for writers?
My only tool was following my conscience.  For me it was a matter of listening to the voice in my head.
What inspires you to write?
The first time I wrote anything was after the deaths of my sister, and parents.  I wrote in order to release the pain I was feeling. Putting the hurt down on paper helped me to deal with my emotions and get the hurt out of my head.  Not wanting to ever recall those years, I eventually threw it all in the trash.
Did you learn anything while writing this book?
I only wrote when I could feel the Holy Spirit communicating with me.  When the voice stopped, I stopped. The one time I wrote on my own, that night the voice told me that didn’t belong in the book.  The next day I deleted my portion of the writing.
What is your favorite quality about yourself?
I try to be true to myself.  I want to remain the person I have always been.

I.M. Free nearly gave up on life as a teen living with an alcoholic parent, but at just the right time, a voice saved her life. That voice led her to a close relationship with God,who she now thinks of as her friend and confidant. She wrote this book so that others will find Him.

Monday, June 25
Interviewed at Confessions at an Eccentric Bookaholic

Monday, July 9
Interviewed at Straight From the Authors Mouth

Wednesday, July 18
Interviewed at As the Pages Turn

Tuesday, July 31
Interviewed at From Paperback to Leatherbound

Thursday, August 9
Interviewed at Read Between the Ink

Friday, August 10
Guest blogging at A Taste of My Mind

Tuesday, August 14
Book reviewed at The Hype and the Hoopla

Friday, August 17
Book reviewed at Read Between the Ink 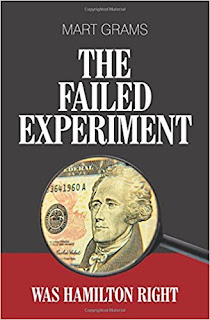 When the American government was founded, the Founders and Framers assumed a government “of the people, by the people, and for the people.” That government is dying. It is under the authority of not “we, the people” but rather a small elite that is trying to snuff out the great experiment of man ruling himself, the common man, the man that within the right system of government can attain his purpose to achieve happiness. Were the Framers wrong? Were the ideas of Alexander Hamilton right? Is man incapable of self-rule? Does he need to be taken care of, watched, manipulated? No! It is not a failed experiment! It is time to retake that government.

Married, two sons, had to endure sons to get granddaughters, 30 years of teaching in northern Wisconsin. Written three previous books: The Great Experiment, Economics for the Remnant, Words My Grandfather Gave Me, a fanatic of the American Dream, lives in small town with his wife Linda and their two cats, Miss Bailey and Stumpy. 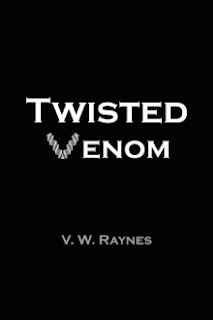 
When young internist Claudia Ranelli attends a medical conference in San Francisco, she has a sexual encounter so bizarre and frightful it nearly kills her. But that isn't the end of her terror. Claudia and her cousin Dru Salinas must discover the identity of the person terrorizing them both, a quest that leads from pit vipers to modern genetics. Claudia tells a gripping story with sensitivity, a humanly scientific perspective, eroticism and a wry sense of humor.

What happens when genes change (mutate)? Sometimes not good things, obviously.
That is the premise of TWISTED VENOM. The story is written and reviewed as a medical thriller,
but where does the fiction end, and where do the facts begin?
As I mention at the end of the book, the gene mutation in the story is real, discovered and studied
extensively since the late 1970's, about when my character Dr. Kral becomes enthralled with it. If you've had cancer or know someone who does, the TP53 mutation may well have been tested for. The TP53 gene is responsible for making the p53 protein; the protein, which has sometimes been called the "guardian of the genome," helps to prevent cells with damaged DNA from growing and becoming cancerous or to repair damaged cellular DNA. A mutation in the TP53 gene may lead to the formation of a protein that cannot function properly, allowing damaged cells to proliferate and form tumors. If you're not impressed with the "Man of the Year" awards, look up Science Magazine's "Molecule of the Year Awards," (now known as "Breakthrough of the Year"), an award won by the p53 protein in 1993. Of course, there are now numerous web sites and conferences devoted to TP53. For example, check out Genetics Home Reference
@ghr.nlm.nih.gov, and look up TP53.
DNA damage can result from some of the usual culprits... tobacco, UV light, radiation exposure,
to name some. In TWISTED VENOM, I've used a somewhat novel mechanism for DNA damage in order to enhance the story; on the other hand, more mechanisms than we currently know about will surely be discovered....

Research on finding compounds that will restore a non-functional p53 protein to a functional
protein are ongoing and fascinating, including recent work at the Cancer Institute of New Jersey. [1]
Unfortunately, reality is a little slower than fiction.

V. W. Raynes is the pen name of a physician practiciing in Texas
Posted by Tracee at 1:06 AM No comments: