Interview with O. Jermaine Simmons, author of I Need a Man 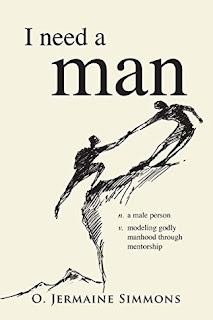 Title: I Need A Man
Author: O. Jermaine Simmons
Publisher: Certa Publishing
Pages: 116
Genre: Religion & Spirituality
In today’s world, there is a real need for men to engage in honest dialogue regarding their struggles and triumphs in life. While there are many definitions of manhood, both sacred and secular, many men find it difficult to apply those truths to their daily lives.
“I need a Man” offers a fresh perspective on the issues of godly manhood and mentoring. Using the Holy Scriptures as a foundation, you will discover why every man needs a godly man in his life and how each man can reach back and become a mentor himself. Indeed, God can use the struggles of one man to strengthen another.
Be prepared to be challenged and empowered! Learn how you can thrive in life, not just merely pass through it.

When did you realize you wanted to be a writer?
I felt the pull to write when I saw my sermons getting longer and longer! I ended up breaking the messages up into parts from week to week. When I looked back over the manuscripts, I realized that any of those series could have been a book! Writing my first book was not too different from writing sermons every week.

How long did it take you to write the book?
Procrastination caused this to be a 3 year process. But once I got started, it only took me a few weeks to complete. I write every day for preaching. So once I buckled down, it was actually pretty simple because I was already used to writing.

What is your work schedule like when you are writing?
I am a pastor “full time”. So I was able to manage my schedule in order to complete my book and the editing process. I had to balance my pastoral duties during the day, family obligations, and used late nights to write this book.

What would you say is your interesting writing quirk?
I broke the conventional rules of writing in that I write in the same voice I speak. My editor understood that from the first read. Some may critique my book and say that it does not meet the “standard.” But there’s no way you can read it and not come away with a practical understanding. I use humor, history, and real-life biblical application. God has given me a keen insight and a powerful method of delivering His truth.

In your opinion, what does it take to get a book published?
In order to get a book published, it takes a commitment on the part of the writer to actually finish the book itself. Once you’ve done that, it is best to find a publisher that understands your voice and your intent for writing. There are many publishers out there. But my goal was to establish a relationship with the publisher. I want to know them, and I want them to know me. There’s a business side to this of course. But the message you’re trying to deliver is what matters most. Finding a publisher who understands this is difficult. But I can honestly say that my publisher (Certa) has become like family. They made the process easier than I imagined it would be at first.

Where do you get your information or ideas for your books?
I’m inspired by the issues that confront people and communities. This is the subject matter I cover in most of my sermons. I believe the Gospel speaks to the issues of life. So my books are geared to evangelize and empower those who are dealing with the difficulties of living in this world every day. The Bible serves as my main resource. Other sources are reliable, but not always spiritual in nature. So I stick close to the Bible for ideas and information.

When did you write your first book and how old were you?
I was 36 when I wrote my first book in 2016!

What do you like to do when you are not writing?
When I’m not writing, I like to listen to music and spend time with my family. I’m into movies and television. Lots of television. At one point I was into sports. Now I’m more likely to play a sports video game than actually hitting the basketball court.

A fourth generation preacher and pastor, Rev. O. Jermaine Simmons, Sr. was born in the great state of Georgia to the Rev. Dr. Perry and Elaine Griffin Simmons. He was raised in city of Newark, New Jersey, where his father served and still serves as pastor of the Abyssinian Baptist Church. At a very early age, the Lord revealed a musical gift which led to many years of service as a church musician, choir director, and even a jazz band trumpeter. These gifts and talents would prove to be the “glue” that would keep this young man connected and active in the Church.
After graduating from high school, Rev. Simmons entered Morris Brown College declaring a major of Early Childhood Education. He received his Bachelor of Science degree in the Spring of 2001. During his years at Morris Brown, he served as the Gospel Choir Director as well as a student-leader in the Campus Ministry department.
In March of 1999, the call to preach the Gospel was extended and accepted. Soon thereafter, Rev. Simmons was licensed by the Abyssinian Church and received further training at the Antioch Baptist Church North in Atlanta, Georgia. During his time at Antioch, Rev. Simmons was trained under the guidance and discipline of the Rev. Dr. Cameron M. Alexander. He was ordained to further carry out the work of the ministry in April of 2004. Even now, the training he received at Antioch has guided him through the work of the ministry and community outreach.
From 2001-2004, Rev. Simmons served in the Atlanta Public School system as a fourth and fifth grade teacher at the Walter F. White Elementary school. His love for education is rooted in three previous generations of teachers in both his paternal and maternal bloodlines. He has received numerous awards from various educational organizations for his tireless commitment to teachers, parents, and students alike.
In August of 2004, Rev. Simmons relocated to the city of Tallahassee, Florida where he served as the Youth and Collegiate Director for the Bethel Missionary Baptist Church. During this time, he received further guidance and training under the leadership of Rev. Dr. R.B. Holmes, Jr.
Only the Lord knew what lay in store for his servant, as his next transition was only two miles away from his previous assignment. In December of 2005, it was laid upon the heart of the Jacob Chapel Baptist Church family to call Rev. Simmons as their ninth Pastor. Standing on the broad shoulders of eight great men, the relationship between Pastor and members has proven to be a very fruitful one.
Since his arrival at Jacob Chapel, over 4000 souls have been added to the Body of Christ and the local church. Twenty Seven (27) ministries have been implemented, all of which are rooted in the motto of “Doctrine, Stewardship, Fellowship, and Evangelism”. Pastor Simmons firmly believes that we were all “saved to serve”. Therefore, the message and the ministry encourage all who attend to “get right, get in, and get active”…
Under Pastor Simmons’ leadership, Jacob Chapel has literally fed the hungry, clothed the naked, ministered to those in prisons, and built houses for those without shelter. It is the message of the Cross, the death, the burial, and the resurrection of Christ from the grave which continues to fuel the fire that burns within this passionate preacher and teacher.
He has been blessed to carry this message to communities and to people all over this nation. But his greatest joy is in knowing that he has reached “the least of these”, and provided hope for all who encounter his compassionate personality and heart-felt presentation. No matter where he is assigned to preach, Pastor Simmons has not wavered from delivering the Good News about “One Friday…”
Aside from being a Pastor, community leader, and dedicated Kingdom worker, Rev. O. Jermaine Simmons, Sr. is the proud husband of Mrs. Elise A. Simmons, and father of one son, Orinthius Jermaine Simmons, Jr. In lieu of the many accomplishments and awards that Pastor Simmons has received through the years, it will always be undergirded by his love for the Lord and for his family.
Posted by Tracee at 7:27 AM