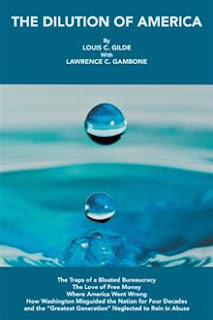 The Dilution of America

America, American society and American industry have all become diluted. What this means is that the country’s political-social-economic situation no longer reflects the design and purpose our founding fathers intended. Many factors play into this problem; and Lou Gilde and Larry Gambone have successfully teamed up in an attempt to cite most of them:

The failure of the “Greatest Generation” to prevent the insidious creep  of socialism;

The paradigm change from business/government cooperation to  anti-business sentiment;

The failure of our inner-city programs, to include industry incentives  and schools;

The curtailing of religious expression and moral behavior;

The eroding of true representative governance by a bloated, unwieldy,  and unaccountable bureaucracy;

The demise of a true free enterprise system resulting from over  regulation; and

The movement from capitalism to socialism by ever-increasing  entitlement (socialistic) programs.

We have reached an important turning point with the economy, the environment, and with the many socio-political issues facing our great nation. Unless the average voter realizes that government is handcuffing our economy, we will suffer economic malaise and worse. Our present approach to governance must be reversed if we are to remain an economic powerhouse in the 21st century.

To do this, we need an educated electorate who will vote wisely in the coming elections in order to resolve the many Governmental problems that have occurred in the past. Until the American voters recognize the fact that Government is its own worst enemy -- and is unintentionally becoming an enemy of the people, the environment, and the economy -- we will continue down the path to ruin. Walt Kelly, in the comic strip, Pogo, said it best: “We have met the enemy and he is us.”

His entire professional career was spent as an industrial environmentalist with unique involvement in cooperative efforts with federal researchers prior to the creation of USEPA. This activity based on innovative waste water treatment resulted in over twenty presentations in the U.S. and overseas.

Because of the early research work, he collaborated with USEPA as an advisor in the preparation of its field manual on "Overland Flow Treatment of Waste Waters" and was awarded in 1979 by Region II EPA Certificate of Appreciation. During the 1970's he testified before Congress concerning rule makings in the environmental area that created unnecessary costs for business resulting in increased costs for citizens. Mr. Gilde also obtained two patents in the environmental field.

During retirement Mr. Gilde did volunteer work for the World Environment Center, a non-profit spinoff from the United Nations assisting U.S. Aide from the State Department on environmental projects incorporate in U.S. Aide programs. He consulted in over a half dozen projects for different countries and was sent to Egypt and Romania to conduct studies.

Mr. Gilde witnessed environmental matters from an unusual perspective in relation to business, government and the economy including the location of numerous new plant sites vs. older plants in distressed areas. He sets forth recommendations for a less confrontational future to foster a more dynamic economy where most of the federal bureaucracy is eliminated and the states are free to soar even higher than Texas and other pro-economy states. A section of the book is devoted to the revitalization of the City of Camden, NJ as a national demonstration for urban America.

Louis is giving away a $25 Gift Card!